The Eastern Shore Rover Crew was formed in the early months of 2001. It is now the only rover crew in the Clarence District, as Lindisfarne Rovers merged with the crew during its inception. Initially crew meetings were held at the Bellerive Yacht Club, with the crew averaging over 30 members for the first few years.

The Eastern Shore Rover crew first formed early in 2001 with the amalgamation of the Clarence District and Lindisfarne Rover crews. In the early inception the crew averaged 30 recorded members each year, with such a large crew neither original dens of the amalgamated crews could house the entire crew, therefore early meetings were held in the Bellerive yacht club. Since 2001 the crew has continued to have a strong presence within the scouting community of the eastern shore and southern Tasmanian, running and participating in many scouting and rover events while maintaining strong numbers of both knighted and squired rovers. Some highlights within the crews young history are; winning the Rover long distance rowing 8 out of the 16 since the crews inception and taking a crew and race vehicle to the annual Mudbash event in Victoria in 2016.

Eastern Shore Rover Crew is a crew that like to do a bit of everything, especially when it comes to the adventurous outdoors. We aim to be as diverse as possible with winter trips for skiing and snowboarding, rowing and sailing in the warmer seasons, rock-climbing and abseiling to four wheel driving at any other time. As well as outdoor activities we also do more social activities, including nights at our Den. The Crew regularly provide service within Scouting and the wider community. 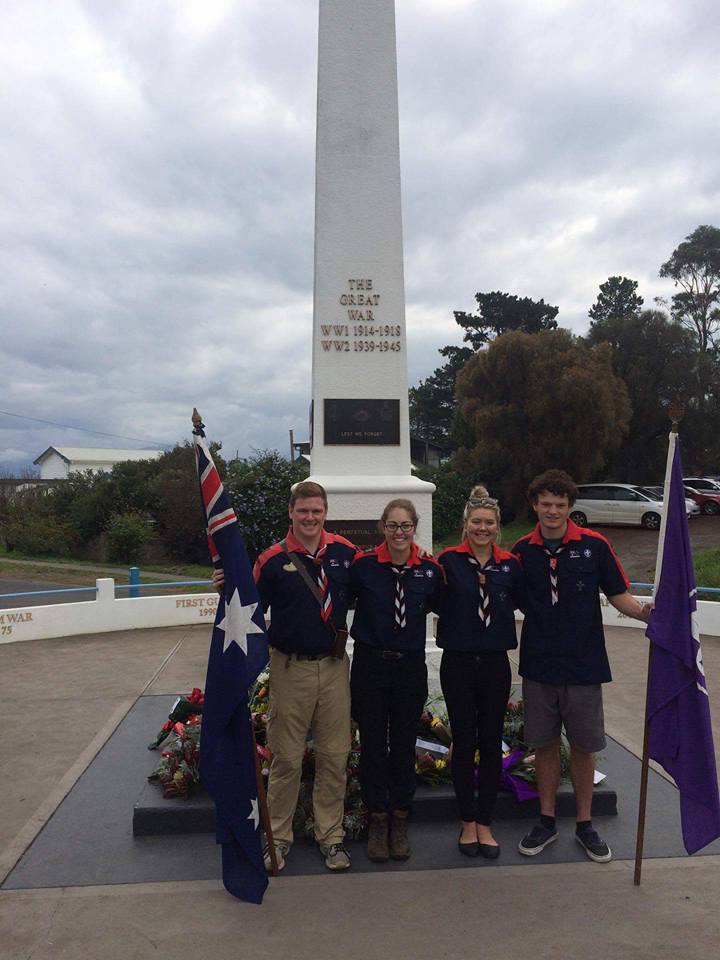 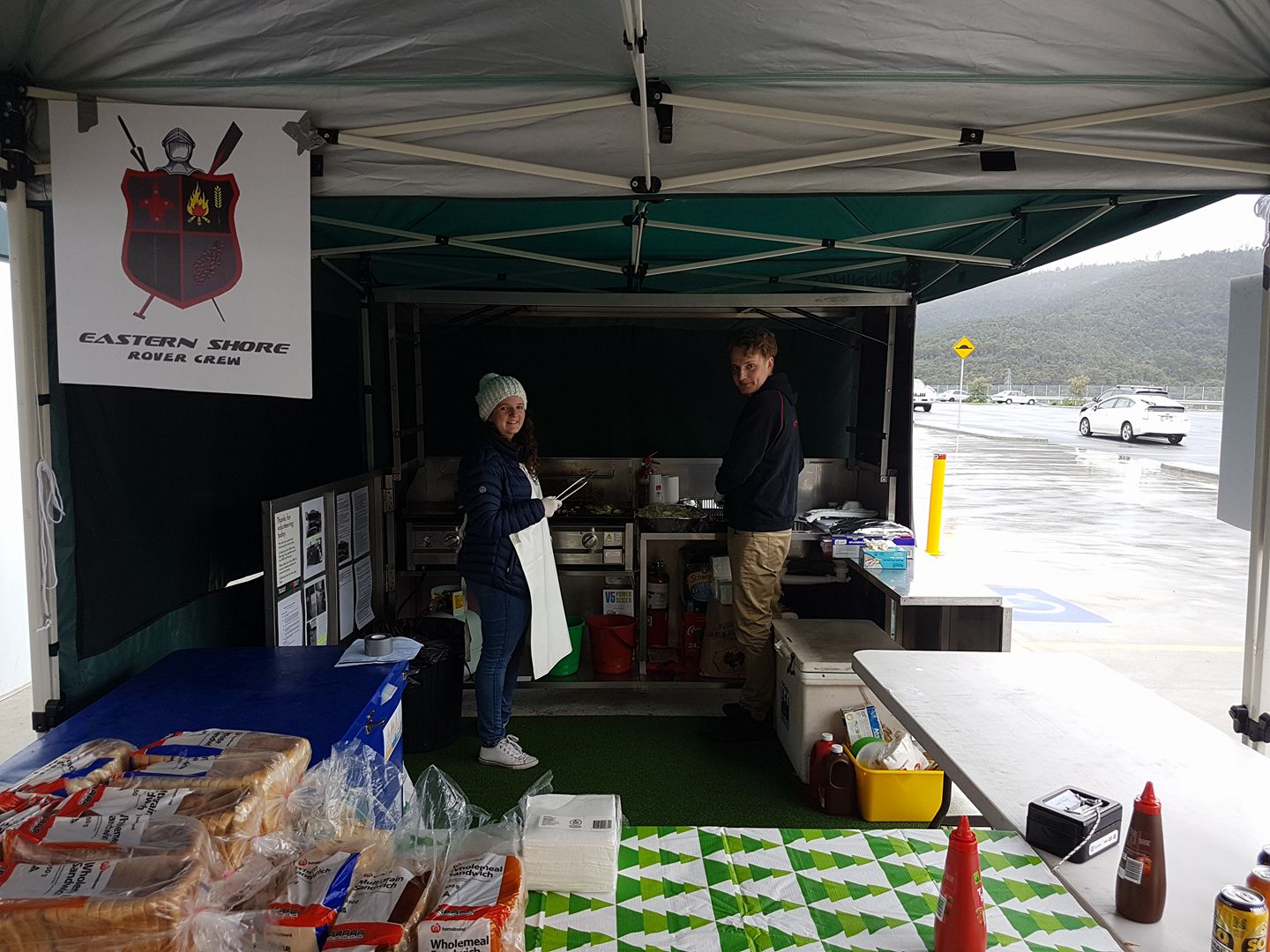 Crew members helping out at a Bunnings BBQ fundraiser, 2017

The crew attends the Scout & Guide Regatta every year where many crew members participate in the organised activities such as rowing races, Tug of War contest, line heaving and gum boot throws, plus Kayaking and Iron Man races. 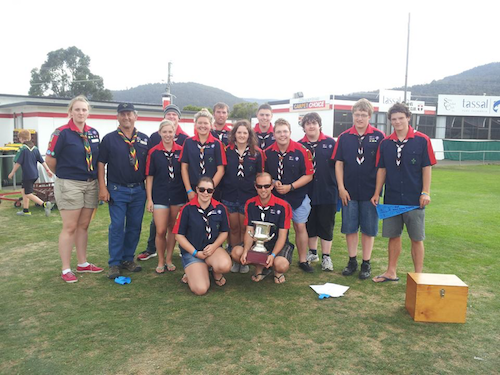 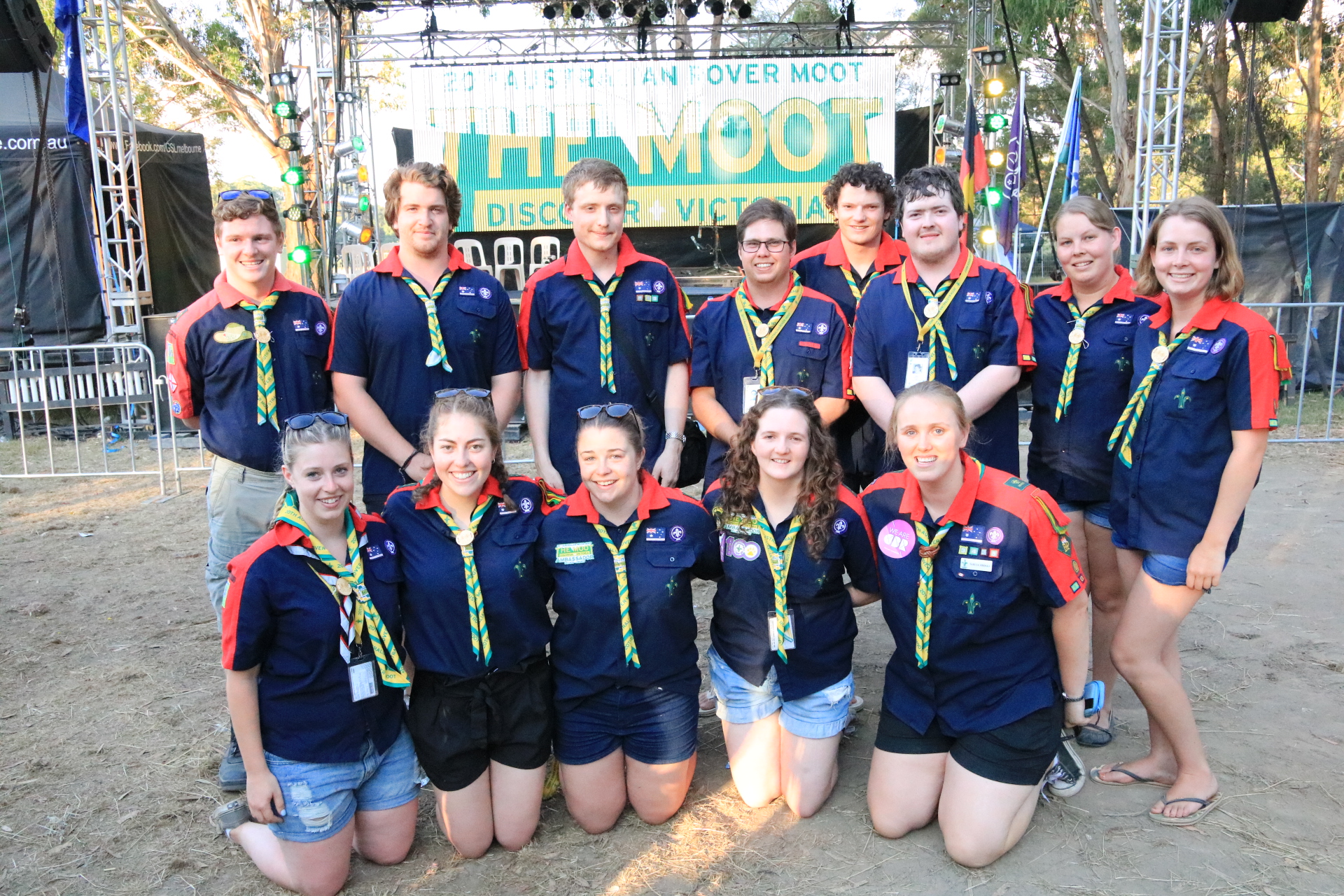 Crew members who attended The Moot in Victoria; 2016-17

We also regularly attend most Rover moots around the state, including The Moot - the 2016/17 National Rover Moot. There are also three annual Rover moots organised in Tasmania: Summer Moot, Easter Moot, and Winter Moot. The last moot organised by the Eastern Shore Rover Crew was the Easter Moot of 2014. An annual Raft Race is also held annually where 'dodgy' rafts constructed by the crews are raced down one of the state's wild rivers - most Rovers would agree that this is a fun thing to do, and a good excuse to have a beer at the end of the day. All these events span multiple days and the crew usually camps at various locations.

As a crew, we drive our buggy at various private properties where the whole crew has the opportunity to drive or passenger. We have raced our buggy at Mudbash and the Baskerville Raceway. Mudbash is an annual motorsport event held at Mafeking Rover Park in Victoria over the Queen's Birthday long weekend in June. Mudbash combines CAMS supported motorsport events, non-racing activities, camping and nightly entertainment of bands and DJ’s. It is the largest Scouting racing event attracting over 600 Rovers and another 600 guests on Open Day. The Open Day is always a highlight as the Rovers put on a display of motorsport for members of the other Scouting sections and the public. Activities for the Open Day range from adventurous to creative including music on the main stage, the buggy Obstacle Course, Hot Laps of the Motorkhana Circuit, abseiling, archery, a bouldering wall, jumping castle, karaoke, face-painting, a scavenger hunt and more. Our buggy in currently the only Tasmanian entrant, joining over 40 entries with teams from Victoria, NSW and New Zealand. Our crew fundraises annually in order to upkeep our buggy. All of the vehicles that compete in Mudbash are different and are built, repaired, raced in and owed by Rover Crews. Vehicles range from modified sedans and hatchbacks, to rear engine frame buggies.

The Eastern Shore Rover Crew was formed in the early months of 2001. It is now the only rover crew in the Clarence District as Lindisfarne Rovers merged with the crew during its inception.